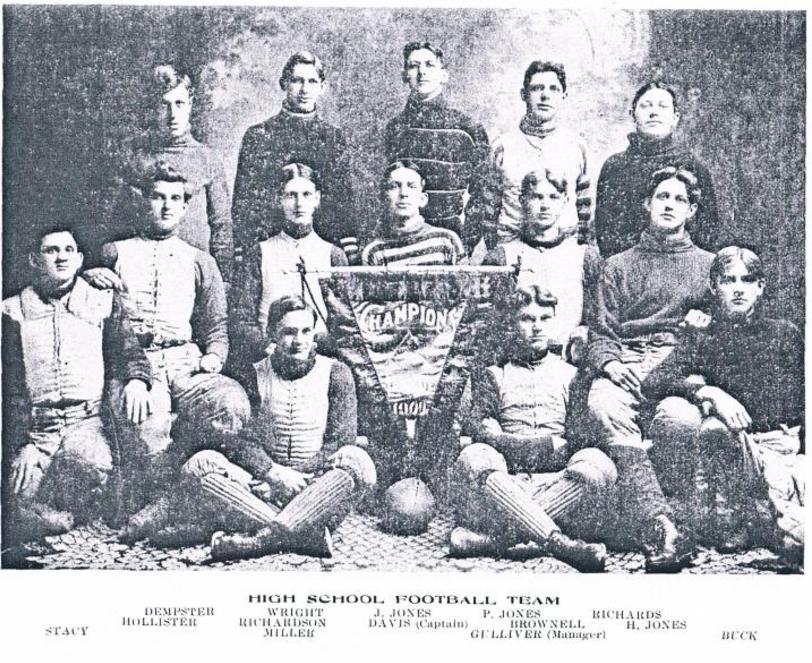 Will Dempster and Art Wright were featured in an article of the 1902 championship football team in a 1954 article in the Independent.  It is worth repeating.

In 1902 with only 13 men on the squad, the locals went though the season undefeated.  That included competition with such teams as Fulton, Pulaski, Phoenix, Parish, and Central Square.

The equipment, which was furnished by the players themselves, usually consisted of the familiar “turtleneck” sweaters, a canvass jacket which was laced in front, and if they were lucky, a pair of canvass pants.  There was no padding or protective devices and no regulation cleated- shoes.  The team was lucky to have one good football for the season and it had to be used for both practice and games.  However, practice was infrequent and was done without the service of a coach.

The game consisted primarily of snapping the ball from center to a backfield man who simply tried to outrun the opponents.  There was one variation of that play in which the linemen and the other three backfield men simply locked arms and bullied their way along.  Success or failure usually depended upon the agility and fleetness of the ball carrier.  There was no forward pass, trick or deception plays.

Will Dempster was born in 1884 and attended old No. 8 school on North Street before attending the Union Free Academy.  At the Academy he played “some football” but according to residents who followed the teams in those days, his activities on the playing field are well remembered.  One fan of the time reports that “When Will hit’em, they stayed hit.  Nobody ever got away from him.”  He played tackle on two championship teams and according to his partner on the line, Art Wright, “Not very many of them got through Will.”

Mr. Dempster remembers the awards made to team members.  All squad members were presented an orange and black skull cap which Will didn’t appreciate too much because, “they made us look like trained monkeys.”  He remembers getting rid of his rather quickly.

Art Wright, the second athlete interviewed, attended Vermillion district school before coming to the village to attend Mexico Academy.  He played football all four years and was the permanent captain of the team.

Art played guard right beside Will Dempster and remembered two seasons.  The first, in 1902, the locals never had their goal line crossed, and the next in 1903, were never beaten.  They participated in a triangular league consisting of Phoenix, Fulton, and Mexico playing each team twice.  A banner, which was purchased by the three schools, was awarded to the team winning the most games in a season.  Somewhere in the present school are two such banners representing championships for two of the three years the league was in existence.  Oswego was also a regular competitor.  Art was among those who were entitled to wear a football sweater after the two successful seasons.

Two games in the years that he played still stick in Art’s memory.  The first was against Fulton on the Fulton field.  The game was played on an island in the river and a ferry service carried the spectators to the game.  “About half of Mexico and all of Fulton were there for the game,” says Art.  The locals came out on top with a 27-0 score.  The next game was a grudge game against Fulton on the old field located near the present Ontario Milk Plant.  “Fulton didn’t get their revenge,” Art added.

Mr. Wright also played basketball and remembers many a dusty evening in the old Town Hall.  There wasn’t too much difference between basketball and football according to Art.