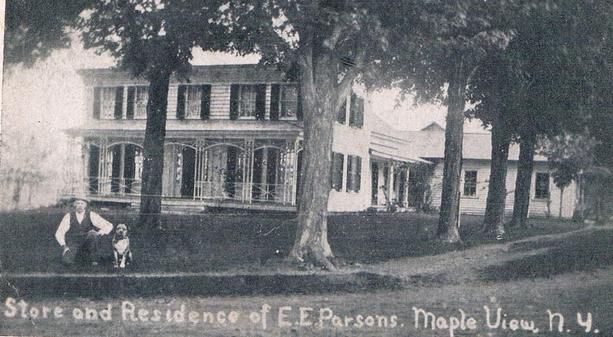 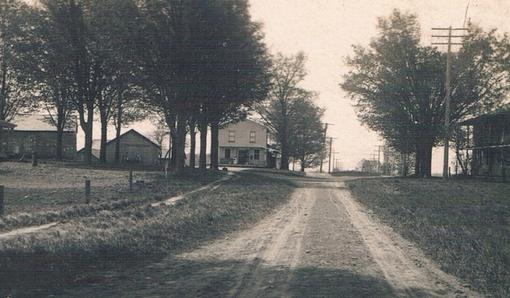 Situated at the crossing of two important highways, the Syracuse and Watertown, now Route 11, and the Oswego-Rome, now number 104, Union Square the present Maple View, belonged to Richland, the 21st town of Scriba's Patent, until 1817 when it was transferred with the surrounding triangle to Mexico.

The Skinner home was across the road from the Inn, facing the north-south road.  By the end of the eighteenth century E.E. Parsons owned the home and had built a small store on the back.  When the settlement was asked to change its name because of the confusion in the post office with Union Square of New York City and Union Square of Oswego County, it was Mr. Parsons who suggested the name of Maple View considering the rows of maple trees along the road on the east and the south.  The trees had been planted by the Honorable Avery Skinner.

Even before it had a name, it must have gained considerable importance as a crossroads in view of the travel on its two highways.  In 1836 it could boast of 17 dwellings.

Solomon Huntington settled at the four corners in 1804 and made his home, erected a tavern, and raised his family there.  His daughter, Elizabeth, married Avery Skinner of Watertown and the young couple also made their home at the four corners and in 1823 opened a tavern on the northwest corner.  Mr. Skinner gave the corners the name Union Square, then secured for it a mail route and post office in 1826.  He helped in the development of the Plank Road Companies and pushed for, and got, the work for planking the two roads that went past his tavern - the east-west road from Rome to Oswego, and the north-south road from Watertown to Salt City (Syracuse).

While the tavern was still functioning, a writer of an unsigned article in the Oswego Times presented a story of its past:

Before the days of railroads and when the middle west was being settled, travel for the long distance was by stage-coach from Rome, through Union Square to Oswego, then by steamers westward by the rivers and lake.  It was in these days the tavern flourished and in its time there was no better or more favorably known hotel in the country.  The passage of the stagecoach was more of an event in those days than the advent of a Presidential candidate,  and when it thundered along the planked highway, with horses in a run and coach swinging and swaying from side to side, with passengers hanging on with hands and teeth, the sight was more inspiring and full of action than the Twentieth Century Limited making its best time. [This was especially true for coaches going east.  Change of the six horse team was made in New Haven and the horses were ready to run – and run they did].   Many weary travelers choose to stop at the Union Square Tavern and rest for the night before continuing with the perilous ride.

Also, the junction was about the halfway stop for travelers going north-south between Watertown and Syracuse.  In the autumn it could not accommodate all the guests who stopped there nightly.  Syracuse was the salt center and the farmers throughout the north country in the vicinity of Watertown, when fall work was done, would drive from their farms to Syracuse, and return with a year’s supply of salt.  In that time of year the tavern knew its busiest times.  One night three hundred teams stopped there and hundreds of men spent the night on the ground in the tavern yard, grouped around huge wood fires, while the night was noisy with the sound of stamping and moving horses”.

The construction of railroads offered comfortable traveling for passengers and easier transportation of goods and  the stagecoaches and plank roads disappeared.  One by one the old taverns disappeared.  A portion of the Skinner Tavern was cut off, and the building moved to face south and State Route 104.  It became the home of the Newton family, and is presently occupied by Frank Newton, and for the summer months, his mother Barbara Newton joins him.  The inn was replaced on the corner by a gas station.

​Looking Back at Mexico