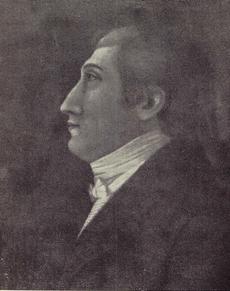 The name Mexico, in its use as a place name in New York

State for more than a century and a half, has had, at least,

4.  A city at the mouth of Salmon Creek on Lake Ontario, known as Mexico

until 1812 and later as the Village of Vera Cruz.

5. The hamlet of Mexicoville, incorporated as the Village of Mexico in 1851.

6. The present political town of Mexico, reduced from the proportions of the

George Scriba was born in  Vohl, Hesse-Darmstadt, Germany on April

In 1792 he purchased a 500,000 acre tract of land between Lake Ontario and Lake Oneida which was known as Scriba's Patent.

Map of the Scriba Patent 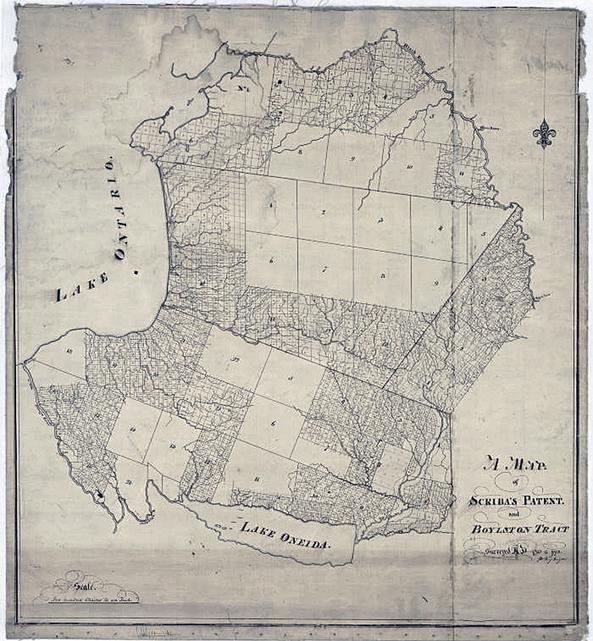 The state of New York acquired title to substantial land holdings from the Haudenosaunee (Iroquois) Indians in 1788.

Seeing potential for profit, well-to-do investor George Ludwig Christian Scriba sought to purchase land from the state. He offered a sum of $800,000 payable over 2 years for greater than 2 million but less than 4 million acres of the tract.
While Scriba's application was pending, brothers named John and Nicholas  Roosevelt purchased 538,966 acres at "3 shillings and 1 penny" per acre. Payment was to be made over time, but in less than 6 months, the Roosevelts sold their holding to Scriba to settle outstanding debts.
The state reduced Scriba's tract to 499,135 acres In May of 1784, and further specified that NY held gold and silver rights, that  5 out of every 100 acres would be allocated to highways, and that the agreement would "cease, determine, and become void" unless 1 family became settled in each tract of 640 acres within 7 years.
Scriba hoped to develop his purchase into viable communities. He planned a canal from Vera Cruz (Mexico Point) to a village and harbor he planned at Rotterdam on Oneida lake (present day Constantia) to facilitate trade from Albany and New York to the Great Lakes and Canada. The canal would propel Vera Cruz into an important Lake Ontario port. Although the canal would extend just 26 miles, a survey convinced Scriba that the project was untenable. Failure to realize his canal, political pressures, and long harsh winters that tended to discouraged speculators and settlers doomed Scriba's expectations for his dream empire.

There were claims of ruins of villages, houses, fireplaces, wells, forts, and entrenchments being plowed up, as late as 1820 or 1830, near the eastern and southern shores of Lake Ontario. No agreement has been reached as to whether these were the work of Indians or if eighth and ninth century colonies of Finns, Danes, and Welsh who had gradually moved south from Iceland and Greenland only to be wiped out by fierce Tartars coming in from Asia and northwestern America.
The presence of both Algonquin’s and Iroquois occupying this land can be seen in their characteristic arrow points , spear heads, axes and other artifacts found on properties in Mexico.   It is believed that they used this area primarily as summer camps for fishing and hunting.
The first white man to set foot on the land of today’s Mexico and its Indian trails was Samuel de Champlain. In 1615 he is said to have lead a band of French and Huron against the Iroquois.  It is believed that Champlain landed four leagues east of Salmon Creek, marched along the shore of Lake Ontario to the mouth of the creek, crossed it near the hamlet of Texas, followed the creek to the site of Mexico village toward Colosse, and then the main trail south toward the Iroquois settlement.  He retreated along the same route, wounded and carried in a wicker basket on a Huron’s back.

"The facts are dimmed because of their great age and the scarcity of written records which alone guard faithfully the memory of the past."  ​Livy

​from Mexico Mother of Towns

A case of Smallpox

A case of smallpox developed in 1858, under somewhat unusual circumstances and with unusual consequences.  Miss Huldah Clark, daughter of Starr Clark, kept a millinery and drapery shop in her father’s house.  On a buying trip to New York she attended an auction being held at an attractive and prosperous looking house.  There she bought some heavy draperies which she had hung in her home by William Bissell, a man of forty, who lived on Water Street (Lincoln Ave.).  Mr. Bissell developed a severe case of smallpox, while Miss Clark had a light case of the disease.  It was supposed the germs were brought into town in the draperies.  Dr. C. D. Snell attended Mr. Bissell, while Mrs. Bissell acted as nurse.  The patient died on December 6th.
Neighbors were afraid to visit the house and it was difficult to find anyone to care for the body, bring a coffin to the house, or bury the dead.  Finally George Wheeler of Lambs Corners delivered the coffin, simply putting it over the fence into the yard.  John McCann who had had the disease cared for the body and attended to its burial in the village cemetery.  Mrs. Bissell stood in the window and watched as Mr. McCann drew the coffin on a hand sled by night through the fields, avoiding the roads.
So strong was the belief in the long continued virulence of smallpox germs, that, at the death of Mrs. Bissell, fifty-one years after the burial of her husband, her nephew insisted that her grave on the family lot be dug as far as possible from her husbands’ grave to avoid danger to the life of the sexton.

Origin of Mexico, Mother of Towns

25, 1752. He was the son of a Lutheran minister.  After mercantile experience as a young man in Amsterdam and the West Indies, he immigrated to the United States in 1783 and settled in New York., becoming a naturalized citizen in May 1784. He became a very successful New York City banker said to be worth 1.5 million dollars at the time he became interested in acquiring real estate. ​

Before the First Settlers