In 1778 the first lot was cleared on the only road in town, the Rotterdam-Mexico City (Vera Cruz) road of George Scriba.  Even after the Oswego road was cut growth was slower than other settlements in the town.  It was the decrease traffic to Vera Cruz and increase of travel on the Oswego road that led W. S. Fitch to transfer his business to the present village in 1814, and the government to transfer the post office in 1815.

This little old village was in the beginning of the settlement of the Twentieth Town, in no way to be distinguished from the primeval forest; it was part and parcel of that forest.

A little section of the village of Mexico, located on Academy Street,between Watson Avenue and John Street, was once known as Toad Hollow.

You might ask how did it get this name?

Well, many years ago a new bridge was built across the Little Salmon River where a bridge now stands.  One day there stood on that  new bridge three boys of that section, by name Bill Adams,Homer Adams and Dean Newell.

Ideas come quickly into young and fertile brains, and as the frogs were croaking in the pond below, Bill Adams took a piece of colored chalk from his pocket, drew the picture, on the smooth siding of the bridge, of an eagle with a ribbon in its mouth on which he printed the words - Toad Hollow.

Then Homer Adams took the chalk and on the other side of the bridge printed - Mill Street.  Thus the  settlement and the street both received names which they bore for many years. 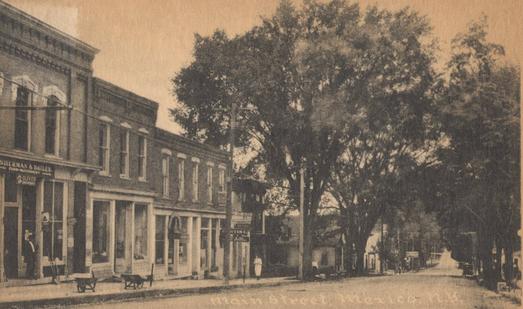 How Did Village Streets Receive Names?

From the August 28, 1942 Mexico Independent
(Errors in spelling, punctuation and grammar were not corrected)

How did the streets in the village of Mexico receive their present names?  Someone asked the Independent that question several weeks ago when the said “You print the names of most streets several times each week.  How did the names first originate.”
Accordingly a survey of our files and local historical records was made.  Reference books furnished a few of the elusive name facts but interviews with local residents with a leaning towards local history produced the greatest success.
Here is what was learned:
Washington, Madison and Jefferson streets were, of course, named in honor of the first, third and fourth presidents of the United States.  In the early days of Mexico, present day Lincoln avenue was call Water Street because of its proximity to Little Salmon river.  The street was renamed in honor of President Lincoln sometime after the Civil War.
Most resident agree that Fayette street is only a shortening of LaFayette, the young Frenchman who so greatly aided the colonies in their war for independence.
Clinton street was presumably named for Gov. DeWitt Clinton, who opened the Erie canal.
Wayne street took its name from that of General “Mad Anthony” Wayne, a revolutionary war hero

Credit for the expansion and founding of several prominent streets is given to Dr. Bowen and Calvin Goodwin.  These pioneering gentlemen opened North Jefferson, Clinton, Fayette, Cemetery (now Liberty), and the south end of Scenic avenue.  Scenic avenue has had three names.  Several years it was renamed Scenic in place of Railroad street. In the village’s early history, the street was called Center street and it did not extend to the present railroad crossing which was built in 1868 when the first train passed thru Mexico.
Mill street was named because of the lumber mills on that avenue and Ames street took its name from the family of Leonard Ames, who in 1804 built a log cabin where the present stone home of W. W. Dibble now stands in West Main street.   The present residence was built by Mr. Ames in 1835.
No one seems to know how Norman avenue received its present name but in earlier days it was call Green street for a family of that name residing there.
The names of North and Pulaski streets are perfectly obvious.
John Street was named in honor of the late John Aldrich, father of Mrs. Arthur Nelson of that street.  When Mr. Aldrich first developed that area, John street was only a winding lane and Railroad street did not yet extend that far north from the center of the village.
Main street is first mentioned in local historical records in 1803 when it ran from Calvin Tiffany’s to Solomon Smith’s, New Haven’s first settler, in New Haven.” 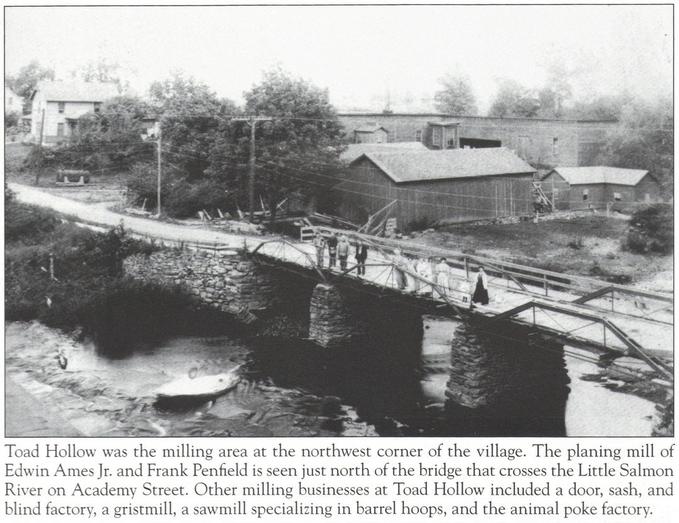