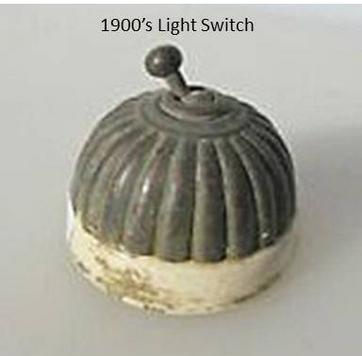 In 1887, a Village Improvement Society was organized, the membership fee being the planting of three trees by the roadside or the payment of $3.00, or $1 a year for 3 years.

Efforts were being made to educate the voters to the advantages of electric lights over the dim and smoky kerosene lamps.  In September of 1887, a few of the new lights were installed on trial for a month.  A. C. Thomas furnishing water power free.  E. L. Huntington had eight small lamps in his drug store; W. H. Penfield, a large brilliant one in the express office; A. C. Thomas, a similar on in Toronto Mill; and Capt. Boyd, one  with a shade that cast a beautiful mellow light in the hotel reading room.  When the current was first turned on, a fife and drum corps paraded, much interest was created, and people drove around the streets to enjoy the lights.

It was said that of the forty-five street lamps at least twenty needed to be replaced; but the pros and cons of elecric

lights to replace them were debated for two years; finally a vote of 110 to 91 decided the debate in favor of electricity.

The representative of the Schuyler Electric Company, Charles E. Hocknell, rented the tannery engine to produce the

power; but engine trouble developed and A. C. Thomas agreed to furnish water power until steam service could be

secured   Clark and Howard, proprietors of the foundry then took a contract for ten years to take charge of the plant

and to furnish sixty horsepower by February 1890.l The engine blew up and Homer Ames was then engaged to furnish

water power.  In 1890 the Company obtained the Hendrickson mill dam in Salmon Creek south of the village which gave

them excellent water power.  Two hundred incandescent lamps were wired and new orders were coming in daily, including

half a dozen residences.

The firs contract for street lights called for twenty lights at $1000 per year for five years.  Service was to be given until midnight on twenty nights in the month   All good Mexicans were supposed to be off the streets by midnight and the moon was to light the streets on the other ten nights of the month.  In case the moon was obscured the village fathers could order the necessary additional service. When the lights flickered, it was said that an eel was caught in the water wheel.   Early in 1891 the Mexico Electric Light, Heat and Power Company, with E. L. Huntington at its head, was able to furnish full service.

Under the management of R. L. Houghton, Penfield's old Wagon Shop became the Company's headquarters.  The shop was taken down in 1927 to make way for a modern substation of the New York Power Corporation.