Not all the settlements were happy with this location and in 1856 the Oswego Falls Independent Agricultural Society was organized to include Hastings, Palermo, Scriba, Volney, Schroeppel, Hannibal, Clay and Lysander.

Sometimes the weather made the year a memorable one for the fair.  In 1882 a severe rainstorm with high winds hit the Mexico Fair Grounds.  Mrs. Frank Jennings of Palermo wrote to the editor of the Mexico Independent relating her experience on the grounds when the storm came:

“No doubt some of the older residents of Mexico will recall the tornado which struck the Mexico Fair Grounds during the fair of 1882.    “Mr. Jennings and I were attending the fair on this day, along with several other Palermo and Volney people.  About four p.m., we noticed a storm approaching.  Everyone ran for shelter and Mr. Jennings untied his horse and turned the covered carriage around, with the back toward the wind.  We climbed in and were none too soon, as the storm came with a fury.   The rain fell in torrents and the wind blew terrific.  The wagon box was soon half filled with water and we climbed onto the seat, while the horse crouched in fear.

“The storm was of short duration and when it was over, the fairground presented a sorry spectacle.  Tents, stands and fences were lowered to the ground, trees broken over and the main building damaged.  A few feet from us, a large flag pole had blown down, striking and killing a horse.  We made our way to the village and there found the streets lined with broken limbs and fallen trees.”

Miss Simpson wrote of the same storm: “At three o’clock on the afternoon of Wednesday September 13, 1882, during the fair, a wind of hurricane proportions and blinding sheets of rain struck the area.  On the fairgrounds the 120 foot liberty pole was blown down, falling on a carriage, injuring the owner and killing one horse.  The cupola of the Agricultural Hall was wrecked and its fall injured a man and fractured a boy’s skull.  It was a miracle no more injuries or deaths resulted.  In the village trees, roofs and chimneys went down.”

Due to financial difficulties, the last fair was held in Mexico in 1887.  The fair was held in Oswego the following year and the land in Mexico was sold.  Other fairs continued and in 1936 the county allotted funds to the Sandy Creek Fair thus insuring a county fair would continue. 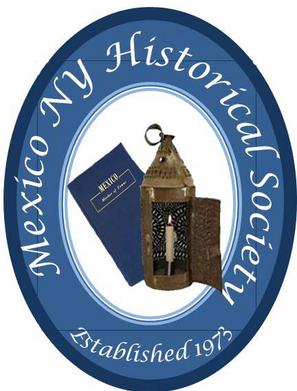 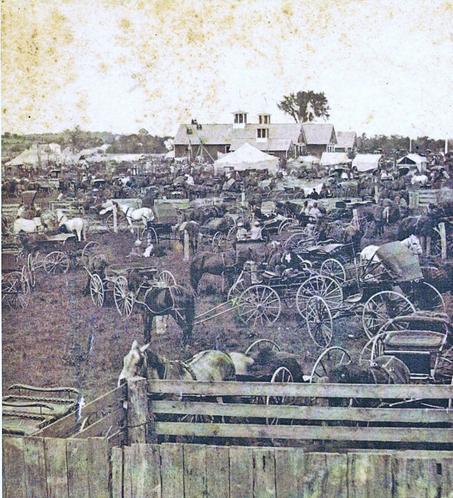 The County Fair at Mexico

The people of Mexico have always loved a fair.  In 1840 the Oswego County Agricultural Society was organized and the first exhibit was held in Oswego the following October.  In subsequent years the fair moved from town to town – Pulaski, Granby, Central Square, New Haven, Fulton and Mexico.  In 1842 the fair was held in Mexico for the first time.  It was located on both sides of Center Street (Scenic Ave.) in the lovely pastures from the hotel half way down the block.  The ladies department was located in the hotel.

In 1855 the Agricultural Society chose Mexico as the permanent location for the county fair.  The grounds consisted of 14 acres purchased from Orson Ames.  The land was located on the west side of what is now called Ames Street, about where the apartments are today.  The grounds had a fence, race track, and a few buildings.  Be 1870 the grounds had grown to over 27 acres.  The buildings consisted of Floral Hall in the shape of a Greek cross, the Agriculture and Merchants Hall, an eating saloon, general offices, and a track control office