SILAS TOWNE - MEXICO, NEW YORK'S REBEL SPY
The Red Coats split up into platoon-size groups along the sand and stone beach of Lake Ontario.  Small fires were started and the men carried their rations from the boats.  Their commanding officer, Brig. Gen. Barry St. Leger, called a meeting of his officers.  Down the beach, about 150 Indians were getting rollicking drunk on the rum he handed out.  St. Leger and his officers moved away from the noise of the encampment and the sweltering beach to find a shady grove along the mouth of Salmon Creek.  St. Leger spread out a map and put ins finger on Ft. Stanwix (near Rome, N.Y.) about 50 miles southeast from his present position on Mexico Bay.  It was a hot July day in this year of 1777 and those upstart Colonial rebels needed to be taught respect for the British Crown.
"We will cut across here," he said, "and surround the garrison at Ft. Stanwix".  St. Leger's officers protested strongly as General Burgoyne's orders were to proceed to Oswego  20 miles further west and join Col. Daniel Claus and Joseph Brant where more troops and Indians were waiting to join the assault on Ft. Stanwix.  Besides, they argued, there were 600 rebels at Ft. Stanwix and the Indians much preferred the water route from Oswego to reach the Mohawk Valley.  They would certainly balk at a difficult overland march.

GENERAL STUDIES ISLAND
St. Leger bowed to their arguments, put his map away, tossed a stick into the creek and said "We'll arrive at Oswego tomorrow".  He stood up and studied a small island in the creek only yards away.  He didn't see anything, but for his own good, he should have.  Sliding noiselessly down the opposite of the tiny island was a tall, lithe man in his early 20s. Silas Town, the man who was to become the celebrated spy of Mexico, was on his way to report to the commander at Ft. Stanwix.
The military situation at this stage of the American Revolution was this:  Gen. Burgoyne, with a large body of troops, had left Montreal to move on the Hudson Valley.  St. Leger split from the main force and headed for Oswego via the St. Lawrence and Lake Ontario.  American Gen. Washington was on the New Jersey side of the Hudson, and Gen. Peter Schuyler, Washington's command of the Northern Army was at Albany.  The Americans were the object of a pincer movement.  Burgoyne from the north and St. Leger from the west.

CAUSED ROUT AT FORT
Silas Town, according to the story handed down by generations made his way through the wilderness to Ft. Stanwix, where he reported that St. Leger was on the move from Oswego to attack the rebel garrison and move toward the Hudson to join Gen. Burgoyne.  The documented facts are that St. Leger did move on Ft. Stanwix from Oswego and was defeated by Gen. Nicholas Herkimer's rebels in the Battle of Oriskany, August 6, 1777.
While Gen. Herkimer was mortally wounded, St. Leger had to return to Oswego.  His Indian allies melted away from him, revolted and scalped American prisoners and British stragglers.  While the battle actually was a stalemate, it did prevent St. Leger from joining Gen. Burgoyne in October of 1777.
But what of Silas Town, the spy who eluded the British and historians with equal agility?  After the Revolution, Town, the spy, returned to Mexico where he became a fixture in the pioneer settlement.  Of this there is no doubt.
Records show that Silas Town, Jr. was born August 5, 1755 at Oxford, Massachusetts.  His name in Mexico history is frequently spelled Towne and sometimes, Towns.  Reports say that before the war, as a spy, he was to find out how the Canadians would react in case of war.  He was caught and restricted to a farm on the St. Lawrence River.  He escaped after two years.  He again offered his services to the Colonial authorities. Washington had heard of British Army movements on the St. Lawrence and Gen. Schuyler sent Silas Town north to check on them.  It was on this mission that he made a name for himself.  There are no official records on his spying.  After the war, he returned to Mexico where he purchased land.

STORY HANDED DOWN
Silas Town must have talked a great deal about his exploits, because the story of his spying on St. Leger was handed down from generation to generation in different pioneer families.  Silas lived in a house on the shore of Lake Ontario on the east bank of Salmon Creek.  The former spy, now 51 years old and dying, told Mr. Hamilton to bury him in a spot which he selected in advance.  That spot was the little island where he had listened to St. Leger's plans nearly 30 years earlier.  He was buried in his island grave in 1806.
He was forgotten until 1871.  On July 4th of that year, a limestone shaft about 15 feet tall was set up at the grave and dedicated to "the memory of Silas Town, an officer under Washington."  The monument was purchased by area residents interested in preserving the Town story.  At the dedication, the speaker is quoted saying that Town chose this place for a grave cause. "few thoughtless feet would trample it."
In 1932, the New York State Education Department placed a bronze marker on Spy Island noting the exploits of American Spy Silas Town (spelled Towne on the marker).

TREES HIDE GRAVE
Well, Silas was right, for today his grave on the state-owned Spy Island at Mexico, New York, is surrounded by posted land.  It can be reached by boat on one side only.  Weeds, brambles and trees hide the grave from prying eyes, and there is peace too.  There are only the birds and sound of the surf.

Did you know…?
Silas Towne, our famous Revolution War hero, is buried at Mexico Point on Spy Island? And did you know two of his ancestors were executed as witches in Salem Massachusetts?
Three daughters of William and Joanna Braceby became victims of the witchcraft persecutions. The eldest, Rebecca, born February 21, 1621, was executed as a witch July 19, 1692, after being led to church in chains on the Sabbath previous and excommunicated. Twenty years later the church reversed its decision and blotted out the record. A monument was erected in her honor by the Norse descendants in 1885. Her sister Mary, though an estimable woman like Rebecca, she, too, was executed on September 22, 1692. Their sister Sarah narrowly escaped the fate of Rebecca and Mary.
Visit our website, www.mexiconyhistoricalsociety.com for the story of SILAS TOWNE - MEXICO, NEW YORK'S REBEL SPY 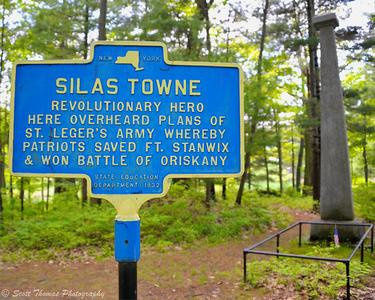