R. Austin Backus wrote a tribute to the Town Clock in 1945.  Parts of the article are written here:  “My first view of Mexico Village was about four o’clock the afternoon of April 30, 1907.  I was a small boy riding in a spindle-back buggy with my father.  It was the third day since we had left the native settlement in far away St. Lawrence County. We came into the village from Pulaski over what is known as the old Mexico-Pulaski Road.  My first glimpse of the village was therefore, from Pulaski Hill, and looming before us was Earl Dexter’s old mill (now the park at the foot of the hill) and the creek.  Just as we passed the Town Hall, the clock struck four.  I had never heard a clock strike like a bell before and I shall never forget it.

“The activities of the community were timed to the strike of the bell; school activities were held in Washington Hall until the Avery Skinner auditorium was built in the new school; official meetings, even an occasional wedding or funeral; lodges; and it even served to warn many ministers that their sermons were lengthy.  Sometimes an event had to pause while the bell tolled the hour; a student was in the middle of his prize-speaking oratory; a political office- seeker was in the depth of his appeal for votes; even old Uncle Tom, in the popular “Uncle Tom’s Cabin”, would pause and wipe the tears from his eyes, and sweat from his brow while the clock tolled out the hour. I remember one night the star of a traveling show, a bell ringer, was ringing out the beautiful “Bells of St. Mary”, and the clock joined in to strike the hour, much to the dismay of the artist.”

George Monson told me Ray DeLong (who lived across the street from the Town Hall) told George as he grew older and was losing his eyesight, the town clock bell was such a comfort, telling Ray the time and helping him keep his sense of direction.

Electric lights were added by the Mexico Electric Company in 1926; the hands have been changed three times with the original set given to the Historical Society and are on display at the Historical Museum.   Repairs have been made through the years, the most recent done in 2000 and paid for by Victoria Chapter of the Order of the Eastern Star.   Francis Emery made new hands and rebuilt the molding for the tower in 1962, and Albert Adams did work on the clock as well as making the weathervane.

George Monson took care of the clock for many years. He would climb the stairs once a week to make sure the clock was working well, the time was right, and the bell rang the hour.  He said,” This clock is very special.  She’s quaint and unique in her looks and the works.”  Many agree with him.

After 100+ years the clock works began to wear out.  In 2020 the Mexico Town Board began the process of installing a new digital clock works.  The original clock workings are being preserved in place. 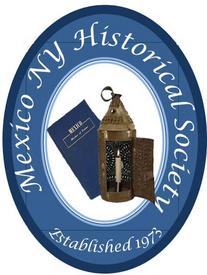 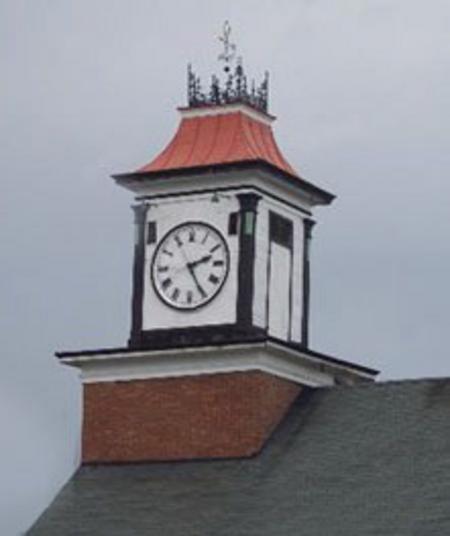 The Town Hall was ready for use in February, 1879, without a bell tower.  The people had talked about a clock for some time, and when they saw the beautiful building they wanted the bell added.  The Independent of March that same year reported that on the 11th the play, “Enlisted for the War” would be repeated in the Town Hall to raise money for the purchase of a clock, the Helicon Band would assist.  Tickets were 20 cents for adults and 10 cents for children.  An amateur “Uncle Tom’s Cabin” was later presented to raise additional funds.